The naval forces of the US and Bahrain recently staged a joint force training exercise which showcased the interoperability between coalition warships operating I the Arabian Gulf. Coalition Task Force Sentinel executed combined exercise Sentinel Shield supporting Sentry and Sentinel patrols in the coalition’s area of operations.

The guided-missile destroyer USS John Paul Jones and Royal Bahrain Naval Force corvette RBNS Al Manama conducted synchronized tactical maneuvers in the Arabian Gulf, while testing their ability to communicate across different systems to each other and with merchant vessels.

“Sentinel Shield tests our ability to work together and allows us to sharpen our skills.” said Royal Navy Commodore Rob Bellfield, CTF Sentinel commander. “Protecting the right to freedom of navigation is an International problem that requires an international solution. At the heart of this mission is our ability to operate with one another in order to maintain the free flow of commerce in this vital region.”

Close cooperation is needed between Sentry and Sentinel patrols throughout the Arabian Gulf to ensure the task force can quickly respond to any unprofessional behavior or malign activity. 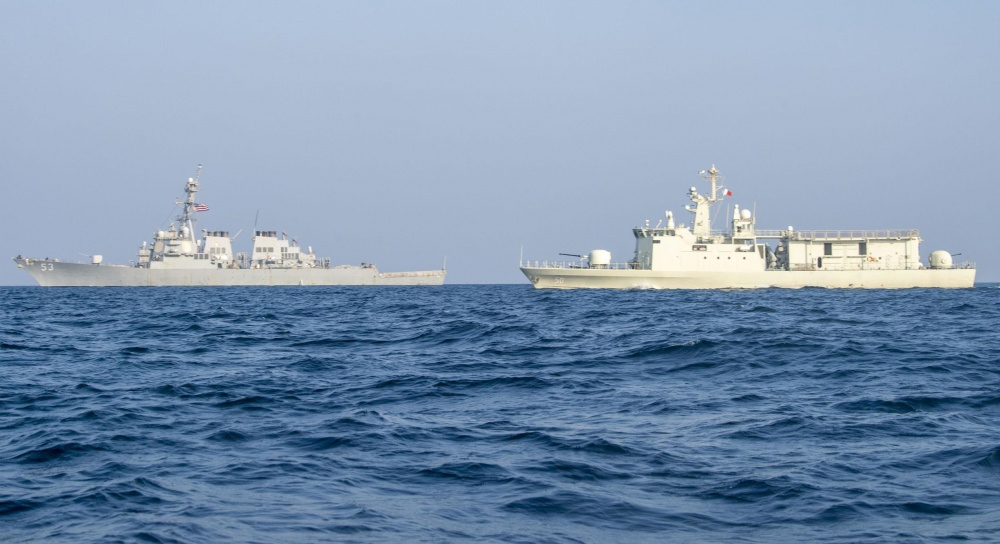 Royal Bahrain Navy Cmdr. Tariq Barkat Al Mehza, commanding officer of RBNS Al Manama added, “By participating, it expands our operational experience and interoperability. This exercise will contribute to increasing cooperation between friendly navies in the region, in addition to enhancing security and maritime stability.”

“It gives me great pleasure, on behalf of myself and the crew of RBNS Al Manama and the Royal Bahraini Navy to be a part of CTF Sentinel.”