U.S. Coast Guard Seizes $38.5 Million in Cocaine in the Caribbean

The U.S. Coast Guard cutter Heriberto Hernandez returned to its homeport in San Juan, Puerto Rico on July 22 to offload approximately 1,375 kilograms of cocaine with an estimated wholesale value of more than $38.5 million seized when the cutter came upon a “go-fast” in the Caribbean Sea. The interdiction was the result of multi-agency efforts in support of U.S. Southern Command’s enhanced counter-narcotics operations in the Western Hemisphere, and during Operation CASTNET II, in coordination with Joint Task Force East.

“I’m extremely proud of my crew as well as the performance and reliability of the Coast Guard fast response cutter,” said Lt. Russo, cutter Heriberto Hernandez commanding officer. “The crew’s proficiency in using all of the cutter’s systems and capabilities throughout our patrol, gave us the ability to effectively operate deep inside the Caribbean Sea which led to this successful outcome and prevented over a ton of cocaine from ever reaching the streets.” 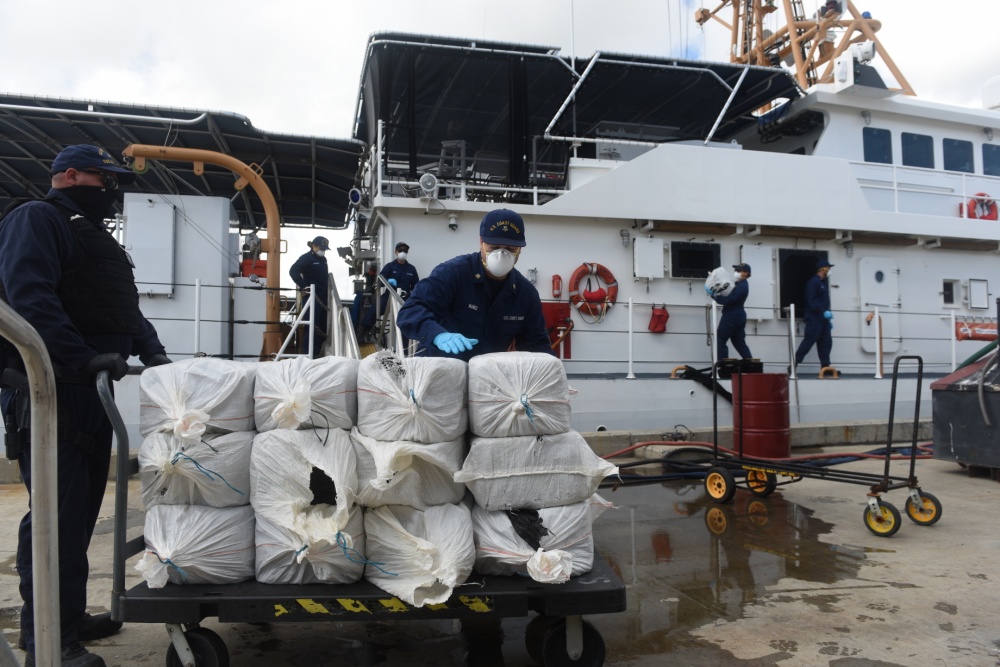 On the afternoon of July 16, the cutter during its patrol came up on the suspected drug smuggling operation. As the cutter Heriberto Hernandez closed-in to interdict the go-fast vessel, the smugglers began to jettison multiple bales of the suspected contraband while fleeing the area at high speed. The crew of the Heriberto Hernandez conducted a thorough sweep of the area where the jettison occurred, and they were able to recover 55 bales which later tested positive for cocaine.

On April 1, the U.S. Southern Command began enhanced counter-narcotics operations in the Western Hemisphere to disrupt the flow of illegal narcotics in the region. The cuter was working as part of the Joint Task Forces East at the time of the apprehension. Operation CASTNET coordinates interagency operations within Puerto Rico with the intent to disrupt and degrade vulnerabilities and increase the overall security of the island. The Coast Guard, Navy, Customs and Border Protection, Federal Bureau of Investigation, Drug Enforcement Administration, and Immigration and Customs Enforcement, along with allied and international partner agencies, are all participating in the counter-drug operations.