The Maritime and Port Authority of Singapore (MPA) is taking new steps to once again aid in crew changes while also ensuring safe port operations. These steps come after Singapore had taken steps earlier in the summer to restrict crew changes through the port after incidents of potential COVID-19 exposure.

The MPA announced that it will be establishing a new self-contained Crew Facilitation Centre (CFC) aboard three floating accommodation barges at the Tanjong Pagar Terminal. The facility will have an onsite medical center, testing and holding facilities for crew signing aboard vessels in Singapore. Opening on September 1, the CFC is dedicated to sign-on crew providing housing for up to 48 hours before boarding their ship. This was an important step as previously the MPA had restricted crew members from staying at onshore after incidents in which arriving crew members might have exposed the community to the virus.

The CFC will be available to arriving crew members to ease some of the coordination issues between flight schedules and ships. Crew signing off ships will continue to proceed to depart Singapore or if necessary, stay at existing designated holding facilities for up to 48 hours, and be strictly segregated from the community. 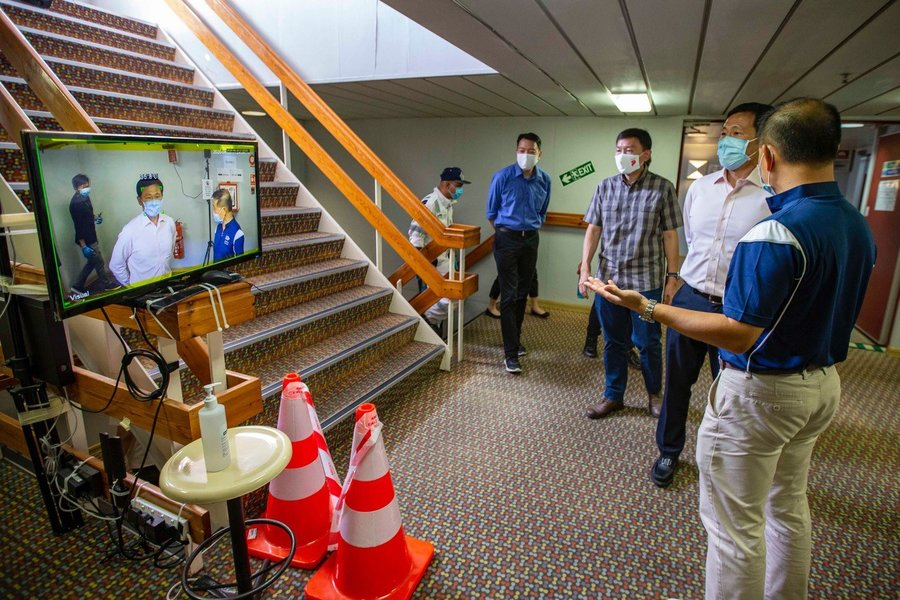 Temperature sensors aboard the accommodation barge – courtesy of MPA Singapore

In addition to the new accommodation facility, the MPA also announced enhancements to the current rules for crew changes in the port of Singapore. The MPA said as of September 1, it would be expanding it efforts considering applications from international crew whose employment contracts has expired, crew who could sign-off without impacting the safe manning of the ship, changes due to the sale or purchase of a ship, or people such as superintendents and service engineers who might be aboard arriving ships. In addition, it continues to consider compassionate leave and crew that are not medically fit to work onboard.

The regulations for sign-on crew generally require a 14-day isolation before traveling to Singapore along with a negative COVID-19 test, but from specific low-risk countries, the isolation period is being reduced to 7-days or not required at all. Crew, however, previously diagnosed with COVD-19 must have had their first positive test more than 21 days before departure to Singapore and all arriving crew must have a doctor’s fit to travel certificate issued no more than 24-hours before departure.

Singapore is permit crew to arrive in small groups of not more than five. Crew must stay within their group while in Singapore and the ship must leave within 48-hours of their arrival.

For crew signing off, they need to have not gone ashore in the last 14 days before disembarking and have been well for that period. They also need to be certified by a Singapore doctor not more than 24 hours before disembarkation.

As part of its efforts, the MPA has also enhanced precautionary measures for ships calling at the port for repairs, surveys, and inspections that require shore personnel boarding the ship. Previously, there had been an incident in which an electrician from shore went aboard a ship where it was later discovered that some of the crew was COVID-19 positive. The MPA has also issued a notice to all harbor pilots on additional precautionary measures to take when conducting pilotage duties on ships.

The MPA noted that almost all Singapore-registered ships managed to conduct crew change, including in Singapore, except for two percent of the crew onboard with extended contracts. MPA said it will continue to work closely with the owners, operators, and managers regarding these remaining seafarers and also seeks to support the international shipping industry with these rules for crew changes.

To further accelerate the process and support the development of best practices for a safe crew change, the MPA along with the Singapore Shipping Association, Singapore Maritime Officers’ Union, and Singapore Organization of Seamen also announced they will establish a Singapore Shipping Tripartite Alliance Resilience Fund with approximately US$700,000. The fund will work with stakeholders in seafaring nations on developing solutions for safe crew changes, such as initiatives on best practices for crew holding facilities and PCR testing centers.