Premier Says New Tasmanian Ferries to be Built Locally, Not in Europe

The efforts to build new ro-ro passenger ships for the operations between Australian and Tasmania took a new turn with the announcement that the Premier of Tasmania has decided not to support the proposed order with a Finish shipbuilder and instead calling for efforts to explore local opportunities to build the planned new ships. The decision, which is a setback for European shipbuilders and an opportunity for Australian shipyards, is the latest development in the effort that dates back to 2017 to replace the current ships running between Melbourne, Australia and Devonport, Tasmania.

Operated by TT-Line Company, the 9 to 11-hour voyage is currently maintained by two ferries originally built in 1998 at Kvaerner Masa-Yards in Turku, Finland to operate in the Greek Islands. The ships, known today as the Spirit of Tasmania I and Spirit of Tasmania II, were acquired and began operating the runs across the Bass Strait carrying passengers, cars, and freight in September 2002.

In 2018, TT-Line announced that after presenting its plans to the Tasmania government, an order had been placed with Germany’s Flensburger Schiffbau-Gesellschaft (FSG) for two new ro-ro ships with increase cargo capacity and modern passenger amenities to begin service in 2021. At the time, TT-Line chairman Mike Grainger said “In preparing a business case for the Tasmanian Government, TT-Line Company Pty Ltd exhaustively assessed vessel types and fleet configurations to determine the most suitable vessels to operate daily crossings on Bass Strait.”

FSG was selected due to its reputation for building quality vessels of this type. The design specifications called for two 212-meter long vessels accommodating 1,800 passengers and up to 600 passenger vehicles.

The plans were first put in jeopardy by FSG’s financial difficulties. After initially voicing support for FSG, TT-Line later announced that it had agreed with the yard that they would not proceed with the order. The line instead signed a Memorandum of Understanding with Rauma Marine Constructions in Finland for the planned new vessels.

Tasmania Premier Peter Gutwein however announced today that as they are seeking to rebuild Tasmania with the local economies impacted by COVID-19 that he instead wanted to explore local capabilities for the new vessels. “We have a choice right now to invest around $850 million offshore in Europe, or to explore all our options in this new post-COVID-19 environment to maximize benefits for Australian and Tasmanian businesses and the people they employ,” the premier said. He announced the formation of a task force to explore the local opportunities, noting that the current vessels can continue to operate safely and efficiently into the future.

TT-Line’s Grainger responded to the government announcement by saying, “The decision is not a reflection of the quality of the business case developed by TT-Line, nor the ability of RMC to deliver the proposed contracts. He continued, “The Government and TT-Line still believe it is essential that the vessels are replaced in coming years to support the growing passenger and freight transport needs of the state.”

The government said that it remains committed to building two new ships within its 2028 timeline. 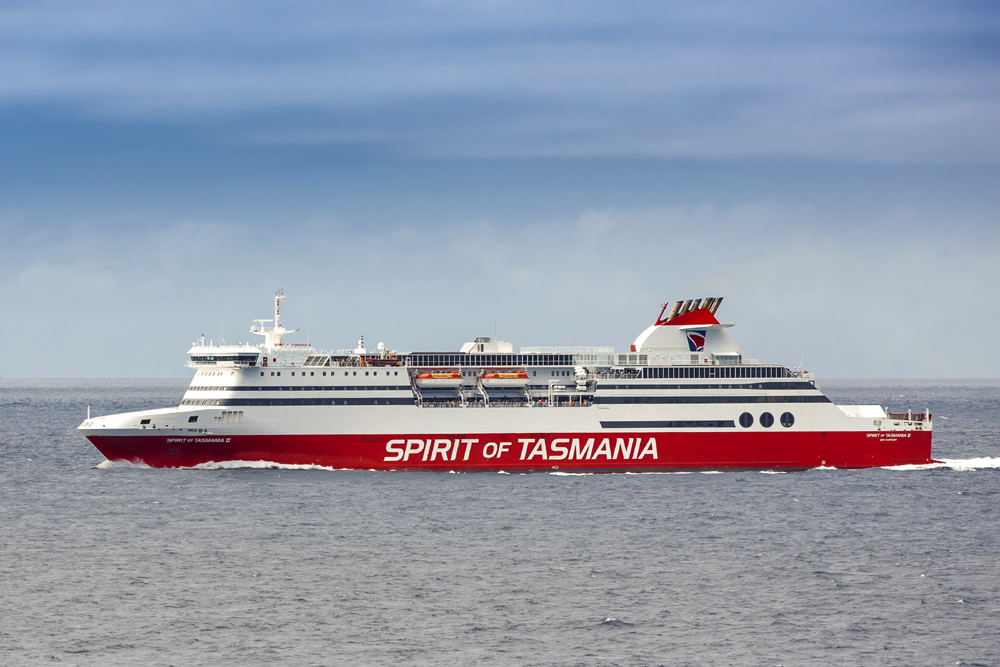 Currently, due to the current outbreak of COVID-19 in Victoria, Tasmanian borders remain closed and while the vessels are maintaining service there are restrictions. Travel is limited to Tasmanian residents returning to Tasmania; essential travelers to Tasmania; freight operators; and passengers traveling to the mainland from Tasmania. Tasmanian residents who have spent time in Victoria within 14-days prior to travel are being quarantined in a government facility. Currently, Spirit of Tasmania is accepting bookings for travel to Tasmania beginning on September 1.

In the twelve months ended in October 2019, Spirit of Tasmania carried a record of 446,869 passengers and record freight volumes. The vessels operated a record 169 days at sea completing a total of 867 sailings.