The National Transportation Safety Board is citing the importance of proper planning even when a vessel is only doing a short movement and when the belief is that it is a simple situation. In its report into a 2019 accident during which an LPG carrier stuck a Washington State wharf, the NTSB cites poor bridge resource management by the pilot, captain, and bridge team, along with complacency that resulted in more than $8 million in damage to the wharf and ship.

“While a shift to and from a wharf may be shorter than a longer distance passage, there should be no difference to the overall planning of the approach speed and angle to the wharf,” the NTSB writes in its analysis. While only a few hours had transpired between the two shifts of the tanker and it involved the same pilot and tugboats, the NTSB concluded there was a sense of complacency that led up to an ineffective exchange of information between the pilot and bridge team not taking into consideration variables such as wind, current, and tidal conditions that might have changed.

The incident under investigation happened on December 15, 2019, when the 741.5-foot partially loaded liquefied gas carrier Levant, owned by Avance Gas LTD and operated by Exmar Ship Management NV, struck the Petrogas Ferndale Wharf in Puget Sound. While there were no injuries or pollution, the allision resulted in penetration and flooding of a forward ballast tank on the vessel and destroyed the wharf’s south mooring dolphin and the catwalk connecting it to the wharf. 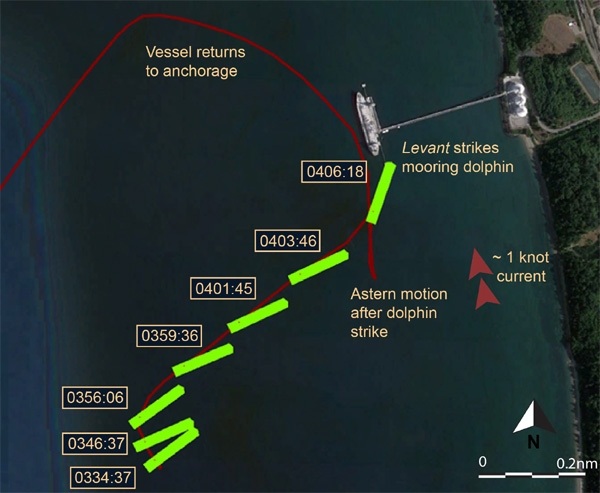 NTSB diagram of the movement of the Levant approaching the terminal

The Levant had been at the terminal loading when according to the NTSB the captain became concerned that due to the outbound tide that the vessel was becoming too close to the bottom and wanted to move to a deeper anchorage approximately 0.7 miles from the terminal. Under Washington regulations, a pilot and tugboats were required for the short move, which was completed on December 14. Approximately seven hours later the vessel was being shifted back to the terminal to resume loading with the same pilot who had remained aboard and the same tugboats.

Returning to the bridge, the pilot quickly briefed the captain about the angle of approach to the wharf and speed taking into account what he believed to be the current tidal conditions. The master determined the exchange of information to be “adequate for the short shift back to the wharf,” and the NTSB believes the other bridge crew was not included in the briefing.

The NTSB determined that the Levant approached the wharf at too steep of an angle and an excessive speed for the proximity to the wharf. The pilot was not using any distance-measuring functions of the radar or the ECDIS during the move. The vessel’s speed increased to about 4.5 knots before the pilot ordered the rudder hard to port, but the NTSB says this order came too late, less than three minutes before the contact.

The other crew members not having been briefed were not prepared to challenge the pilot the NTSB says and they also report “a non-pertinent conversation took place,” that likely distracted both the pilot and master just before the order to turn was issued. Terminal employees on the wharf confirmed that the vessel seemed to be coming in too fast and they were forced to run to shore before the walkway collapsed during the allision.

The NTSB concludes the vigilance of a pilot and bridge team should be increased, not decreased, with a ship’s proximity to dangers and obstructions. Regardless of the distance or duration of a transit, the bridge resource management fundamentals of planning, communication, use of all available resources and information, monitoring, and management of distractions are essential to operations with a pilot on board.