Mauritius continues to report progress working with the grounded bulker Wakashio that has been leaking oil into the environmentally sensitive area. According to the latest reports, the prime minister is saying that most of the fuel oil has been removed from the vessel, but the environmental disaster continues to unfold in the waters and on the shoreline in Mauritius.

Efforts have been underway since the weekend to pump approximately 4,000 tons of low sulfur fuel and diesel from the grounded bulk carrier. The vessel cracked letting several fuel tanks leak oil into the water and rough seas were threatening to break the vessel apart. Yesterday, August 11, reports were that the salvage teams had been successful in stemming the flow of oil and today most of the oil may be off the ship before it breaks apart. However, more than 1,000 tons of fuel have already leaked into the environment.

International assistance has been rushing to the island while residents volunteered to string booms and mop up the oil on the shoreline. Wildlife experts have been attempting to save birds and other animals that are already being discovered soaked in the oil. The Prime Minister of Mauritius and the Minister of Environment, Solid Waste Management and Climate Change, today visited the Blue Bay Marine Park and at Rivière des Créoles to see firsthand the efforts to control and clean up the spill. 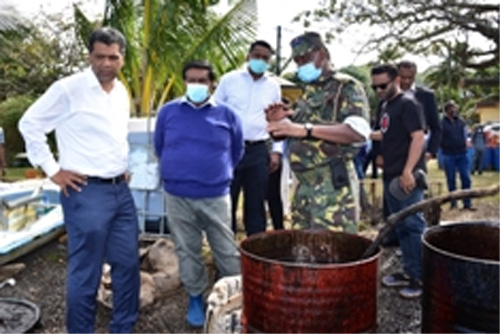 The Panama Ship Registry and Panama Maritime Authority (AMP) today responded as the flag state of the vessel offering full cooperation with the authorities on the island of Mauritius in regards to the investigations into the causes of the accident, said the director of Merchant Marine, Rafael Cigarruista.

The Panama Registry also provided information about the vessel reporting that it had all its valid technical certification, issued by the NKCLASS (Nippon Kaiji Kyokai) Classification Society, and a statutory certification valid until April 22, 2021, when it must undergo its cycle of inspections for due renovations.

According to the Panamanian authorities, the Wakashio sailed on July 14 from Singapore’s offshore terminal and had encountered adverse weather conditions near the coast of Mauritius. Due to the sea conditions, the ship told Panama that they had altered course under the supervision of the captain and first officer. At 19:25 hours on July 25 the captain, first officer, and chief engineer confirmed that the ship had stranded.

The account provided by the ship, however, varies from an analysis completed by Windward and reported by Forbes that said the ship had been north of the normal sea lane during its approach to Mauritius.

A tug boat sent in by Smit who was hired to conduct the salvage continues to have a line attached to the vessel in an effort to prevent it from drifting further. However, the vessel has buckled with experts predicting it is only a matter of time until it breaks apart.