Brittany Ferries’ new ship the Salamanca was recently launched at the CMJL shipyard in Weihai, China, where she is under construction. Powered by liquefied natural gas, the vessel, which is the second of three being built for the company, is being billed as the first LNG powered ferry for the UK market.

The first of the new ferries, the Galicia entered service in December 2020, and she will be joined by the Salamanca in 2022 and a third sister ship the Santoña in 2023. Both the Salamanca and the Santoña will be powered by LNG operating on the company’s long-distance routes connecting the UK with Spain.

The Galicia was fitted with Caterpillar Marine diesel propulsion engines. The motors are Methanol or LNG gas ready, but will require upgrading to the dual-fuel specification. The Galicia also has an in-line exhaust gas scrubber system fitted to the exhaust of each main engine. The second and third ferries of the class will be delivered to operate on LNG as their fuel. The Salamanca is being equipped with two Wartsila 12V46DF engines generating 13,740 kW each (18,500 horsepower per engine). 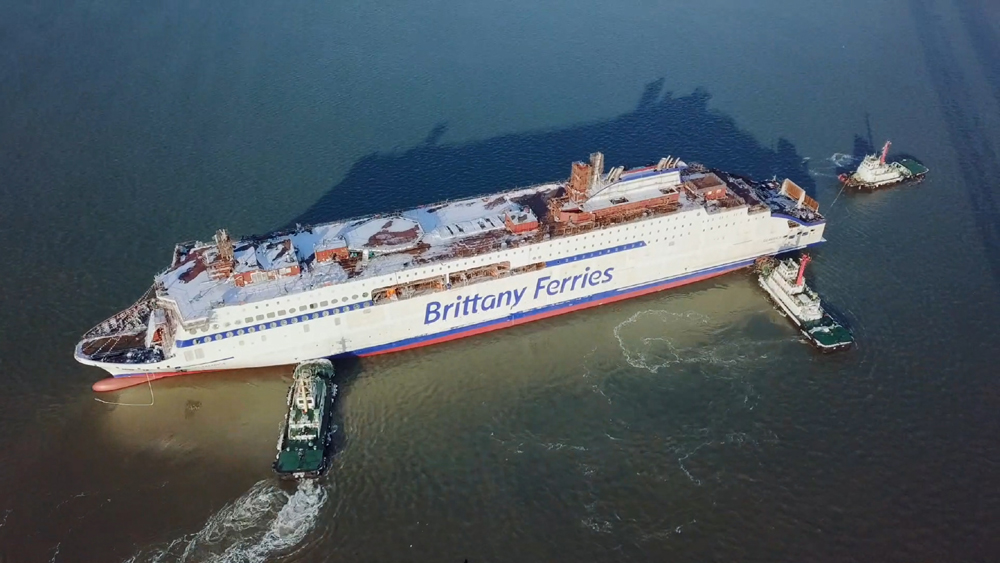 Salamanca being maneuvered to the fitting out berth – Brittany Ferries photo

“Passengers expect more comfortable, cleaner, greener vessels and society rightly demands sustainability. Shipping companies that fail to improve are therefore destined to fail,” said Christophe Mathieu, chief executive Brittany Ferries. “It’s why these E-Flexer ships are so important as we look to emerge from the current crisis. Galicia, Salamanca, and Santoña, are clear evidence that we are determined to sail towards a sustainable and successful future.”

Aside from fuel, all E-Flexer vessels have been designed with the environment and efficiency in mind. Particular attention has been given to fuel-efficient propulsion plants and long, slender hull and bow design. Friction-reducing silicon paint coats the underwater hull further reduces fuel consumption while propeller and rudder design provide improved maneuverability. Bow thrusters work in conjunction with articulated rudders, making it possible to facilitate tight turns without stern thrusters

The vessels are being fitted with other elements to also improve efficiency and their environmental performance. Alternators installed on the shaft lines produce energy even at very low speeds, which means the ship’s electrical generators are only needed when the ship is alongside.

The facilities for storing LNG will be supplied by Repsol in Spain. Under the terms of the agreement, the fuel company will build two quayside LNG bunkering terminals in the ports of Santander and Bilbao, including a 1,000 m3 storage tank to ensure an uninterrupted supply for the Salamanca and the Santoña.

The three ferries will be among the largest ships operated by Brittany Ferries. They are 41,671 gross tons with a length of 705 feet. They have a capacity of 1,015 passengers along with over 2.7 km of lane-space to house passenger and freight vehicles. The ferries are registered in France. 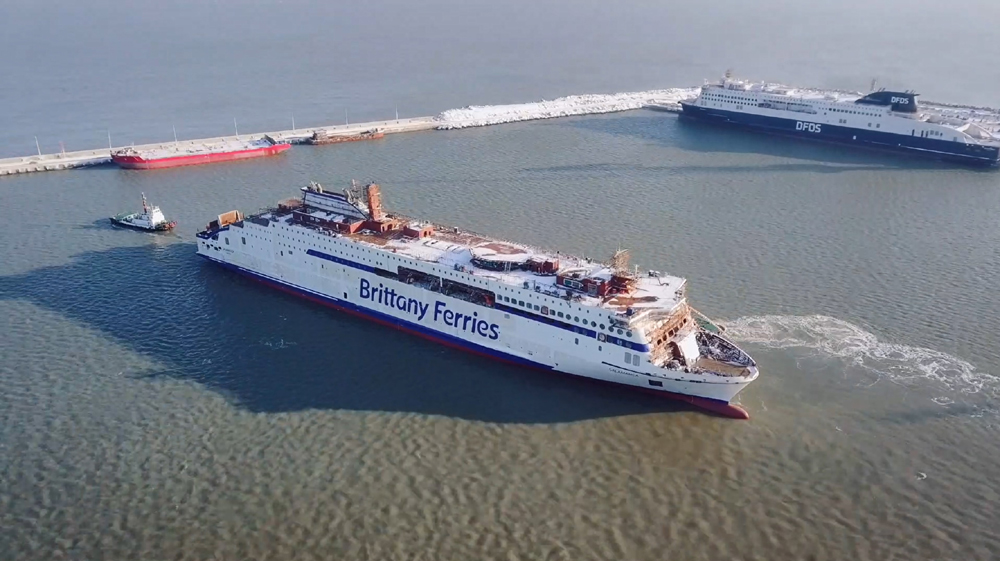 Salamanca after being floated out on January 6, 2021 – Brittany Ferries photo