Countries around the world are rushing to the aid of Mauritius after the island nation’s prime minister declared a national emergency as oil continues to leak into the environmentally sensitive area from the grounded bulk carrier Wakashio. Mauritius issued an urgent appeal saying the country was not equipped to salvage the ship and deal with an environmental disaster of this magnitude.

French president Emmanuel Macron announced that specialists and equipment were being airlifted from nearby Reunion Island to assist. They will be joining salvage experts who have been on site for the past several days but hampered by bad weather as they worked to assess the situation and develop a plan. Smit Salvage was hired to begin the salvage efforts and support vessels were beginning to arrive in Mauritius. 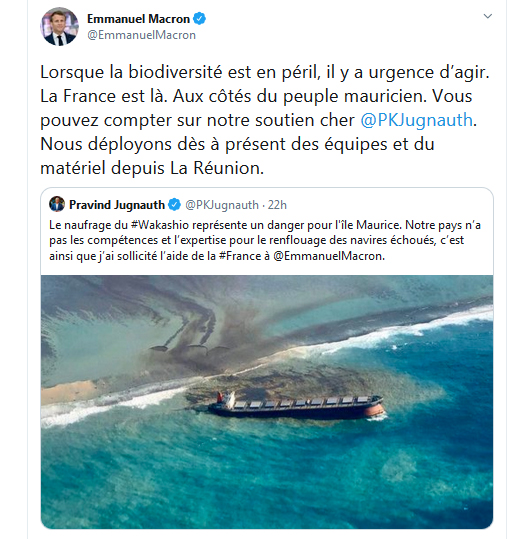 Exchange of Tweets between France’s president and Mauritius’ prime minister

In the meantime, residents and environmental groups have banded together in a grassroots effort trying to limit some of the damage to the fragile marine environment.  They have volunteered to assist helping to position barriers to slow the oil’s progression onshore and into the nearby marine parks.

Salvage experts hired by the ship’s owners, Nagashiki Shipping Co. have also been frantically working to pump fuel off the ship after its hull fractured. According to a company spokesperson, “Despite the recent poor weather, a tanker is alongside and is removing fuel oil from the Wakashio. Helicopters have also been deployed and are assisting in the removal of oil from the vessel.” 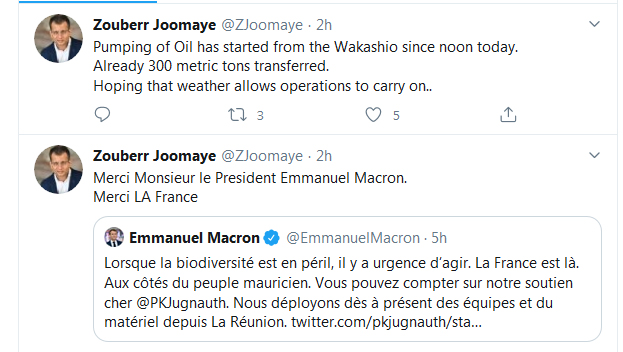 Pumping operations started as of mid-day on August 8 and initially were able to remove over 300 metric tons of fuel oil from the ship.  At the time of the grounding, the 200,000 DWT bulk carrier was reported to have approximately 3,800 tons of fuel oil, 200 tons of diesel, and 90 tons of lube oil on board for its voyage that originated in China and after a stop in Singapore was en route to Brazil. Rough seas in the area in recent days caused a fracture on the starboard side of the vessel’s hull in at least one of its fuel tanks.

The incident began on July 25, when the bulker ran aground off the east coast of Mauritius. Initially, the government reported that there were no oil leaks from the vessel and that they were closely monitoring the situation. In addition, as a precaution, they were working to place oil barriers around the vessel and at the entrance to the famed Blue Bay Marine Park.