However, the World Meteorological Organization (WMO) has voiced concern about the increasing impact of the COVID-19 pandemic on the quantity and quality of weather observations and forecasts, as well as atmospheric and climate monitoring.

Meteorological measurements taken from aircraft have plummeted by an average 75-80 percent compared to normal, but with very large regional variations; in the southern hemisphere, the loss is closer to 90 percent. Surface-based weather observations are in decline, especially in Africa and parts of Central and South America where many stations are manual rather than automatic.

WMO’s Global Observing System serves as a backbone for all weather and climate services and products provided by the 193 WMO Member states and territories to their citizens. It provides observations on the state of the atmosphere and ocean surface from land-, marine- and space-based instruments. This data is used for the preparation of weather analyses, forecasts, advisories and warnings.

WMO Secretary-General Petteri Taalas said: “The impacts of climate change and growing amount of weather-related disasters continue, as we have seen with Tropical Cyclone Harold in the Pacific, and the floods in East Africa. As we approach the Atlantic hurricane season, the COVID-19 pandemic poses an additional challenge, and may exacerbate multi-hazard risks at a single country level. Therefore it is essential that governments pay attention to their national early warning and weather observing capacities.”

Large parts of the observing system, for instance its satellite components and many ground-based observing networks, are either partly or fully automated. They are therefore expected to continue functioning without significant degradation for several weeks, in some cases even longer. But if the pandemic is prolonged, then missing repair, maintenance and supply work, and missing redeployments will become of increasing concern. 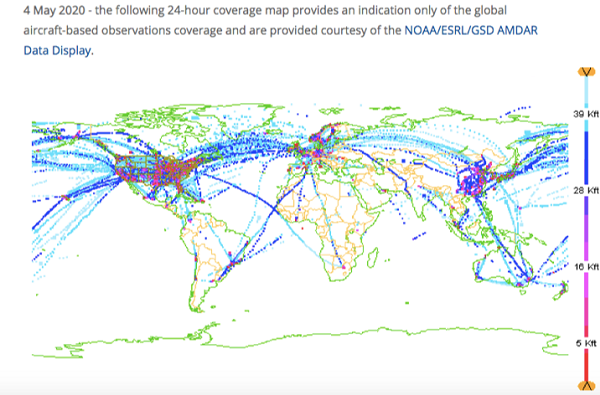 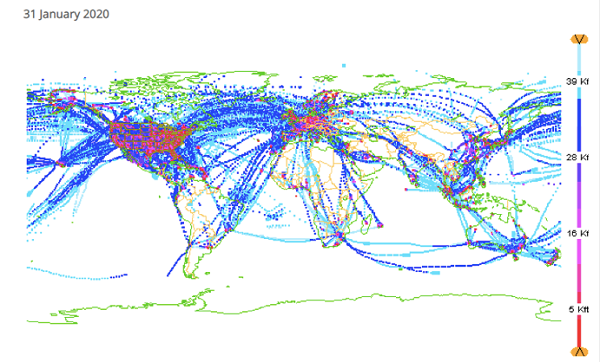 The AMDAR observing system produces over 800,000 high-quality observations per day of air temperature and wind speed and direction, together with the required positional and temporal information, and with an increasing number of humidity and turbulence measurements being made. Currently 43 airlines and several thousand aircraft contribute to the AMDAR program.

The decrease in the number of commercial flights has resulted in a reduction of around 75-80 percent in observations of meteorological measurements from aircraft platforms. The loss is closer to 90 percent in some of the most vulnerable areas where other surface-based observations are scarce, for example in the tropics and in the Southern Hemisphere.

Some countries are launching extra radiosondes to partly mitigate the loss of aircraft data. This is taking place especially in Europe under coordination by the European Meteorological Services Network (EUMETNET). Radiosondes are flown on weather balloons and transmit measurements critical meteorological variables back to the ground during their flight from the surface up to altitudes of 20 to 30 kilometers.

WMO is also monitoring the exchange of observations from the marine observing systems, which provide critical information from the two thirds of the earth’s surface that are covered by the oceans.

These systems rely on a high degree of automation, and most parts are expected to continue to be working well for a period of up to several months. However, drifters and floats will need to be redeployed, moorings will need to be serviced and ship observing systems will need to be maintained, calibrated and resupplied. Over time a gradual decline in observation numbers may therefore be expected, and this will continue until the necessary supply and maintenance activities can resume.

At this point, the most significant impact is on the Voluntary Observing Ships (VOS) program, where a reduction in data availability of about 20 percent compared to normal levels is seen.

The WMO says the situation demonstrates the importance and stability of the space-based observing system. Currently, there are 30 meteorological and 200 research satellites, providing continuous, highly automated observations. The satellites are operated by members of the Coordination Group for Meteorological Satellites (CGMS) and of the Committee on Earth Observation Satellites (CEOS). While in the short run the space-based observing system component is expected to remain unaffected and fully operational, WMO is in contact with meteorological satellite operators to assess the possible long-term impact of COVID-19.