Celestyal Cruises announced that it has acquired the Costa NeoRomantica cruise ship from Costa Cruises. It becomes the seven ship that Carnival Corporation has sold from its fleet as part of the announced efforts to accelerate the disposition of older ships from the fleet as the company continues to manage its business during the global pause in cruise operations.

Carnival’s CEO Arnold Donald announced that they were proceeding with plans to remove ships from the fleet that previously had been expected to be sold in the next few years, replaced by newer and more efficient ships. Making the announcement on July 10, he said Carnival had agreements to sell five ships and preliminary agreements to sell three additional ships, all of which were expected to be delivered to their new owners in the next 90 days. Four additional ships that had previously been sold will also be delivered to their buyers bring the dispositions to 13 ships from Carnival’s fleet of 104 cruise ships.

Currently in Manila as part of the crew repatriation efforts, it was unclear when and where Celestyal would take delivery of the Costa NeoRomantica. The company said that details of the ship’s delivery and deployment would be announced at a later date.

Introduced in 1993, then known as the Romantica, the ship was one of Fincantieri’s first new constructions for the modern cruise industry. At 53,000 gross tons and accommodating 1,800 passengers, she is today considered a small cruise ship, whereas Costa is currently introducing ships more than twice her size and capacity.

The announcement of the latest sale also sparked renewed speculation into the final two ships to be sold by Carnival Corporation. The Curacao Ports Authority, however, may have unintentionally answered the speculation with posts about the arrival of two of Carnival Cruise Lines’ oldest ships at its container terminal in recent days. They said that the ships were offloading equipment, which lead to the speculation that the 1990-built Carnival Fantasy and the 1996-built Carnival Inspiration had been sold. Each of the ships is around 70,000 gross tons accommodating 2,000 passengers. 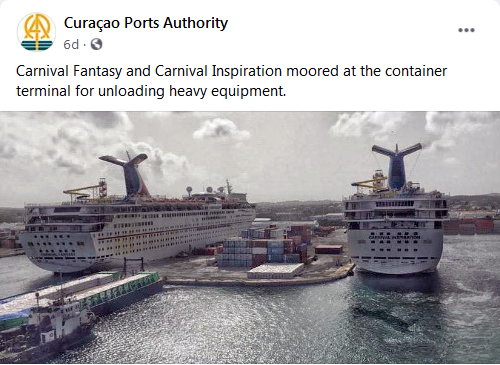 While Carnival Cruise Line has so far refused comment, the Carnival Fantasy departed Curacao on July 13 with her AIS showing a destination of Izmir, Turkey, where she is due on July 28. The Carnival Inspiration departed Curacao today, July 17, due in Izmir on August 1. Observers noted that these trips seemed to be positioning the two ships to arrive at breakers yards in Turkey potential for “recycling.” Further, Carnival Cruise Line announced that it has mostly completed its crew repatriation efforts meaning these trips do not appear to be transporting crew home to Europe as other Carnival ships have done.

Before the announcement of this latest sale, Carnival’s Holland America Line confirmed during the week that four of its ships had been sold, with two going to Fred. Olsen Cruises for operations in the U.K. market. The buyer for the other two ships, which are scheduled to be delivered within the month, has yet to be identified.

Carnival started the current disposition by selling Costa Cruises’ Costa Victoria with it emerging that the 1996-built ship would be dismantled in Italy. P&O Cruises also announced that it had sold the 2000-built Oceana with that cruise ship departing England on July 8 and arriving today, July 17 at its destination in Greece. Again the details of the buyer has not yet emerged.

If the speculation is accurate, these sales will complete Carnival Corporation’s announced disposition efforts.