The Royal Navy survey ship HMS Enterprise has called at Beirut to survey the harbor and deliver humanitarian supplies after the devastating explosion earlier this month.

Enterprise has spent the past several weeks loading stores from the RAF Akrotiri air base in Cyprus, then carrying them across the Mediterranean to Beirut. The delivered goods include 500 canvas cots, 112 tents and five field kitchens. The supplies will be able to house and feed up to 500 soldiers from the Lebanese Armed Forces (LAF) who are working on the relief operation.

With supplies on board, Enterprise sailed to Beirut last week. She berthed adjacent to the capsized cruise ship Orient Queen, just across Basin Three from the blast site on the Port of Beirut’s silo pier.

After unloading, Enterprise got under way with the task of surveying the harbor’s seabed for any changes or hazards to navigation. The ship carried out a full bathymetric survey, measuring the depth of the water and mapping the underwater features of the harbor approaches. 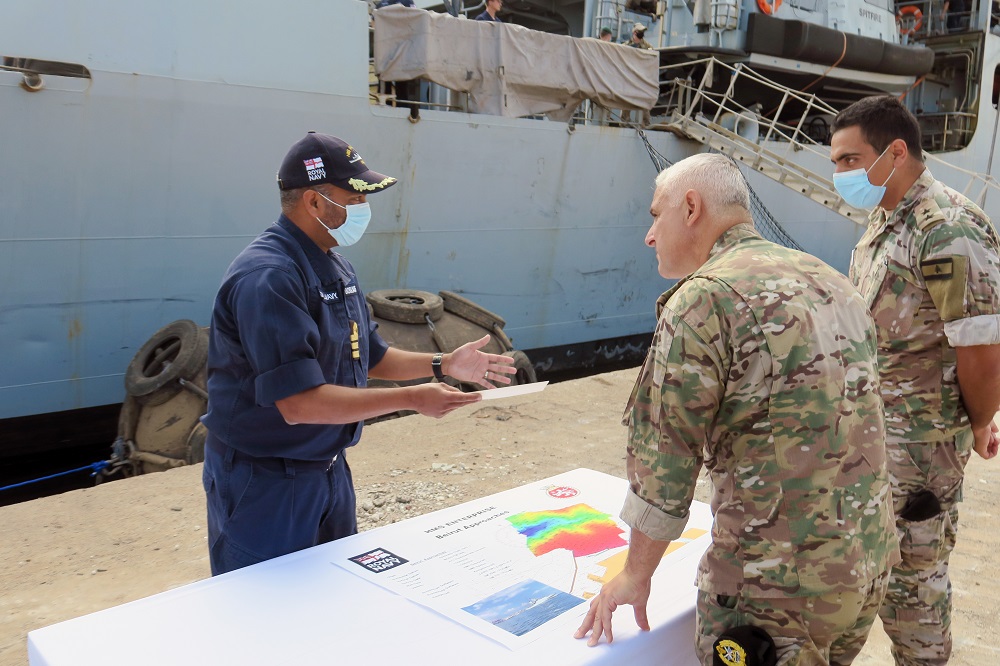 Briefing Lebanese forces on the results of a survey of the harbor approaches, not including the area near the blast (Royal Navy)

Working closely with her survey motor boat, which was able to go close in to shore, Enterprise completed the entire task in a day’s work. The raw data was processed on board the ship and handed over to the local government in Beirut.

“HMS Enterprise has had a small role to play here supporting our partners in Lebanon in their efforts to rebuild and more importantly, reopen this vital port,” said Commander Cecil Ladislaus, commanding officer of Enterprise. “Given our strong ties with our fellow hydrographers in Lebanon, we are here to deliver support both ashore . . . and afloat through survey work which will complement that which has already been completed by the Lebanese Navy.”